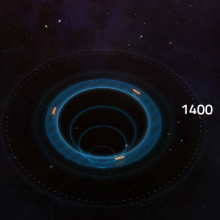 Destination of the sector is labelled, for example, if it is sector 100, planet 101 to planet 125 are going to exist in the sector (the planets only range from 01-25). Also you can view the sector even before your fleet enter the wormhole by clicking on the Wormhole and clicking on view sector.

Wormholes are choke points during large scale sector invasions between opposing alliances, as such they are an asset to those who control wormholes between such battles.

Defending alliances can bottleneck wormholes and easily intercept any fleet attempting to invade a sector. As such, offensive alliances in control of a wormhole have an easier time retreating and summoning reinforcement fleets when attacking other alliances. Large battles tend to congest around wormholes as seen in Civil Wars.