The Unstable Reactor is a unique thruster that functions similarly to Fusion Thrusters speed-wise, but has the added ability to explode for massive damage upon destruction of the ship. It is restricted to Iron Star Company Hulls.

The damage of the explosion scales up with both the power and the total health of the ship as shown on the stat card (excluding bonuses from Fleet Commanders). 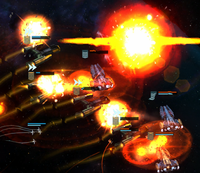 Python Cutters explode to a devastating effect on Apocrypha Cruisers

Unstable Reactors are very effective in close combat because your ships will wipe out anything nearby when they are destroyed. Naturally, Python Cutters and Hurricane Frigates are the first choice in fleet combat as their speed enables them to effortlessly face-hug enemy ships as they die. Unstable Heretic Cruisers excel in base rushes, with each explosion significantly damaging many modules at once due to the cruisers' high health.

They are also used on Vigilante Battleships, Machete Destroyers and Freyja Carriers as an anti-blitz weapon to counter attacks from cutters and to some extent, frigates. Note that damaged ships will still explode with respect to their maximum health, i.e. the explosion power is not affected by any damage taken prior to combat, making microrep (10% health, the minimum percentage required for a ship to be launched) fleets extremely deadly.

Unstable Reactors have much lower XP than Fusion Thrusters, making them the standard thruster for low-level Iron Star Company fleets. 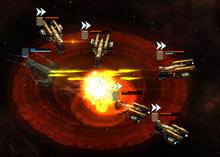 Unstable Reactors take up almost double the mass but are slightly slower than Fusion Thrusters. Their ability is activated only when the ship is destroyed, and requires lots of health (aka repair time) in order to be effective. Be prepared to make sacrifices if you have this thruster equipped.

Unstable Reactors have a large but finite explosion radius; slower ships may not be able to deal any damage if the enemy knows that you have this thruster equipped and is actively trying to keep distance to avoid being destroyed.