It fires a set of three projectiles which travel quickly in a small spread, much like the ship version. 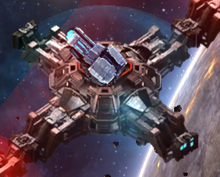 They have sufficient range to outrange destroyers and thus fend off sniper attacks, while also having a small minimum range that is difficult to exploit. Their damage is very high for a Kinetic weapon, even exceeding that of Energy weapons such as the Aurora Ray Turret and Impulse Beam Turret, making them effective against blitz attacks. They have a superior projectile speed that can be further accelerated by Iridium Arrays, making them extremely difficult to dodge especially in large numbers.

Storm Driver Turrets are excellent defenses against squadrons due to their high accuracy and fire rate.

Storm Driver Turrets are quite massive; this limits how much armor and shields you can stack on your Combat Modules.

Storm Driver Turrets, while fast, can still miss their targets at maximum range. Exterminator Destroyers and Liberator Destroyers often outstrafe them while simultaneously firing at Combat Modules, though this is also true for just about every other long-ranged base weapon.

They do not have nearly as much range as the truly long-ranged Kinetic base weapons such as the Gemini Driver Turret, limiting their coverage against sniper fleets.