The Storm Driver is a medium-range Kinetic weapon that is locked to Demon Corps Hulls.

It fires three rounds of fast projectiles in quick succession with a slight spread, taking little time to reload. 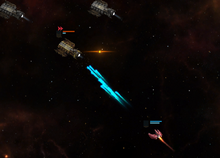 Storm Drivers have relatively high damage as a Kinetic weapon. They have superior projectile speed and some spread, making them almost impossible to dodge when equipped with Iridium Magnets.

Their small minimum range is very difficult to exploit, so the weapon is still viable in close combat.

Storm Drivers are often paired with Phased Magnets or better yet, Reinforced Rails. This enables them to ignore a portion of enemy shields and inflict direct armor damage, guaranteeing a long repair time.

On frigates, the use of Electric Rails with this weapon is common because its fire rate can make up for the special's short stasis duration, allowing them to continuously impede enemy ships.

Storm Drivers lack the range of typical Kinetic weapons, slow ships that are equipped with this weapon often find themselves kited by battleships.

Storm Drivers also lack firepower relative to other medium-ranged weapons, in particular the Reverb Ray, which deals more damage in 2 bounces and weighs less despite having Focused Optics equipped.