To find the segment on base attacks, see Base Assault Strategies/Types

Tactical micromanagement is the minor, detailed gameplay elements that must be manually addressed and controlled by the player. In VEGA Conflict, it's a critical aspect and a deciding factor of victory in any battle (the other factor being technology, setup and what tier class your ship is). Learning all the combat maneuvers, tactics and improvisation during battle as capable of dexterous control with ship movement are all the crux of tactical micromanagement.

Generally, the main goal of micromanagement is to ensure your ships are evading enemy fire and reducing incoming damage through maneuvers whilst keeping enemy ships inside your ship's firing range. In any battle, examine the weapons, ships and shields the enemy has and think quickly and predict what the enemy will do. As the enemy maneuvers their ships, you must adapt and improvise in such a way that allows your ships to dodge enemy fire or remain outside of their beam weapons range while at the same time, dealing some damage of your own against them.

Whilst technology and ship configuration is undeniably the other most important aspect in achieving victory in any battle, micromanagement of your warships is the other skill that must be mastered. The greater your ability to control your ships well, it is possible for your fleet to defeat a technologically and numerically superior enemy fleet depending on the disparity of the two commanders' skills. 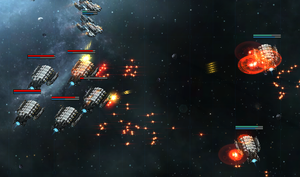 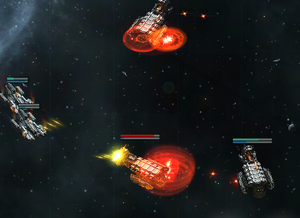 To the right is an example of superior micromanagement skill. The green fleet which has damaged and outnumbered faces a more heavily equipped fleet.

The battle commences and green fleet loses the heavily damaged Venom Battleship but manages to maneuver his frigates into the blind spot of the red's fleet.

By the third picture, the red fleet has nearly been completely annihilated, the battle continued onwards and green's Venoms have done a 180 degree turn to pursue the last opposing battleship. Green fleet only loses a single, already heavily damaged battleship and red losses are five times greater than that.

In many battles, adept skills in controlling fleets can dramatically multiply your warships performance in combat two to three fold. 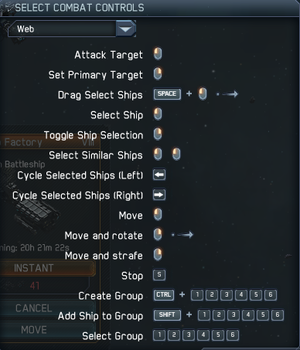 Learning the most basic controls are key to building the foundation to better dexterity at ship control. Generally, players who have played other RTS games such as StarCraft may find it much easier to adapt and learn these controls and make effective use of them in combat.

There are currently two types of configuration of controls. It's ideal to use keyboard to select your ships since it's much faster and allows your to react a second or two faster.

Obviously an extremely common maneuver, it's effectively used to dodge explosive or projectile weapons and also used by frigate ships to kite slower warships. You should always strafe or keep your ships moving and unstacked when attacking a fleet equipped with explosive or projectile weapons. This ensures your ships will live longer against constant fire.

Although stacking can be ill advised against explosive weapons, since explosive weapons splash damage can allow enemy to score substantial bonus damage against your fleet, it can be very useful as it allows your ships firing range to overlap allowing them to engage the same ship simultaneously. Generally used for frigates, most effective stacking requires you to use the keyboard to select ships and rapidly strafe them to the location in the middle of your formation at the beginning of any battle. This is the strategy of choice for most if not all cutter fleets because of their extremely high durability/size ratio and their ability to outrun practically any other ship in the game. Their ability to get up close and unload on targets makes this strategy a must for any cutter.

Only commonly used for battleships, flanking involves moving to the port or starboard (the side) of the enemy fleets. If enemy has arranged their fleet into a certain formation, this could place you to a certain advantage. This strategy is only suitable for battleships that have dual broadside arcs, but can be used on other ships with 270 degree forward firing arcs like cruisers, albeit with less range.

Involves flying in a circle around a stacked group of enemy ships, a ship's forward propulsion allows it to dodge a majority of incoming explosive and projectile fire.

Usually used when kiting VEGA Cargo Fleets. The divide and conquer takes advantage of the various different speeds of ships to avoid being attacked in full force. It involves running away from multiple ships for a said time before turning around to engage and destroy the ships one by one. Combining this tactic with Hit and Run or Run n' Gun is very efficient on just about any VEGA Cargo Fleet.

Even with great skill, sometimes you simply cannot win. In such cases, retreat is a viable option - whether to wait out the battle, or simply to regroup and reform your ships. It is not dishonorable per se, but it is usually more fun to lose your ships anyway. If you do not wish to engage, then don't.

Hit and run is the most commonly used tactic in managing Mass Driver or Gladius Driver Nighthawk or Condor Frigates. The player will stack up their ships in a 6 by 1 or 3 by 2 formation. Then, they will turn to a side where the range is almost out but still in, and strafe at the same time. As the slower ship approaches, you get the first shot. When you almost get in range, the player will run away and turn around again at a safe distance. This cycle is repeated until all ships are eliminated. This only works if your ship has more range than your opponent's, and if your ship is faster than your opponent's to outrun them enough so you can get the first shot.

This is actually not hard. It's just not used often. This is an easy one. In energy weapon battles, there might be some CPUs fighting you with energy weapons like disruptor rays. Strafe to trade fire amongst your ships so that when one almost runs out of HP or shield energy, the CPU will automatically switch to the other.

The second variation of trade fire is commonly used in fleet vs fleet, specifically with Revelation, Apocrypha or Rapture Cruisers. When a ship's shields run low, the ship will be moved to the back and be guarded by ships that have much higher shielding and strength to allow the ship to survive for longer and provide extra DPS to boost the damage before the ships are breached and the said ship is destroyed, or it stays until the battle is won or becomes a draw.

Running and Gunning describes a tactic where players take advantage of a cruiser's 270 degree firing arc to propel itself almost straight in a line while simultaneously firing and staying out of the target's range, or dodging any incoming fire. This is only used primarily with Rapture, Revelation or Apocrypha Cruisers.

While in general it is preferable to control your fleet manually, the AI is capable of many things players are not. It can strafe and turn much better than a player can, and on occasion AI fleets can actually be better than the players. Examples of this include the Vector Destiny fleet, which is capable of destroying several Demon Corps fleets in succession, despite having a lower level. In close range duels, players are not always able to control all their ships simultaneously - in these cases, it may be a good idea to switch over to autopilot.

There are various strategies for events, but the best are listed here.

The first event. The best tactic originally was easily to hit VEGA Prosecutor 50s. The fleets had little to no change. However, most players didn't know of the Genesis Cruiser and Venom Battleship mixed with Gladius Driver combo that would only become popular in the next few months. As such, most players ended up autoing VEGA Prosecutor 35s to get the prizes.

The Condor Frigate gaining the ability to strafe caused the newly discovered VEGA Elite 50 method involving the use of decoys to fail on VEGA Retaliator 50s, as the Phased Projectiles could still be outstrafed easily by the frigate and always ended up killing the battleships. Due to the lack of Iridium Magnets and lack of preparedness, most people resorted to autoing more VEGA Retaliator 35s or 33s.

Easily one of the toughest events to date. The VEGA Decimator 50s were insanely difficult to kill due to the Gharial Cutters and Swarm Corvettes having insane shields and damage. As such, the people who managed to do this event had to use Thermal Beams on Apocrypha Cruisers, doing the Run and Gun tactics, and repeatedly coining the repairs, or did the old fashioned auto the VEGA Decimator 35s to achieve the prizes.

Also annoyingly difficult, but a well placed strategy using Run and Gun tactics with Apocrypha Cruisers mixed with Thermal Beams taking 4% damage each run allowed players to do the event attacking VEGA Peacekeeper 55s with little trouble. The rest of the other players would resort to autoing VEGA Peacekeeper 35s as the standard backup method when faced with trouble in an event. This event also featured the coveted Rapture Cruiser, which is on most of the wish lists of the players who didn't get it.

All the Riots 1-4 progressed with little trouble, and most players resorted using the old fashioned hit the VEGA Elite 50s to gain loot, and a very select few could hit the VSec 50s. However, Riot 5 angered many players due to a bug, and that event, most people who still wanted the prize simply shifted to hitting VEGA Elite 50s. However, autoing VEGA Cargo 35s or VSec 35s was almost completely unaffected by the bug.

Not too difficult as well. Most players attacked the VSec Prosecutor 55s due to the vulnerability by simply mixing Run and Gun while avoiding the ranges, although it's harder than it looks sometimes. Others simply resorted to autoing VSec Prosecutor 35s.

Another easy event. Gladius Driver Rapture Cruisers or Apocrypha Cruisers could take down 55s no problem, and auto fleets worked as usual.

The 1st event to feature 2 different types of fleet setups from wormholes and planets. Planet setups were easy and could be kited with Rapture Cruisers armed with Gladius Drivers with absolutely no trouble. Auto fleets always worked.

The video is extremely outdated, however, the ships retain almost identical appearances.