NOTE: THIS EVENT HAS ENDED AS OF 5TH OF DECEMBER. DEMON CORPS PLATOON FLEETS OR GREATER UNKNOWN SIGNAL FLEETS ARE NO LONGER LAUNCHED AND INTEL IS NO LONGER OBTAINABLE 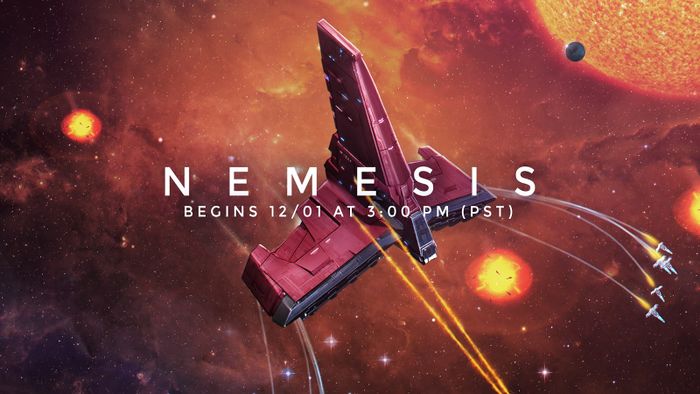 The Machiavellian General Geir is an elusive foe, and not easily beaten. After so much fighting, there are some who would even surrender to him, but the Demon Corps won't allow it. There is just one path open to the rebellion, and only those who are prepared to make sacrifices may take it.

Nemesis is the 27th Major event to occur in Vega Conflict. It gave the final T5 Demon Corps hull into the game and is the end of T5 hulls.

File:VEGA Conflict Nemesis
Note:Larus is the person who talks to you at around the middle of the video.

<poll> What do you think of this event? Amazing, i love the fleet layout and diversity It was okay, could be better Eh I liked it a bit No opinion Eh i really didnt like it I hate this event so much Another coin grab by KIXEYE BS </poll>