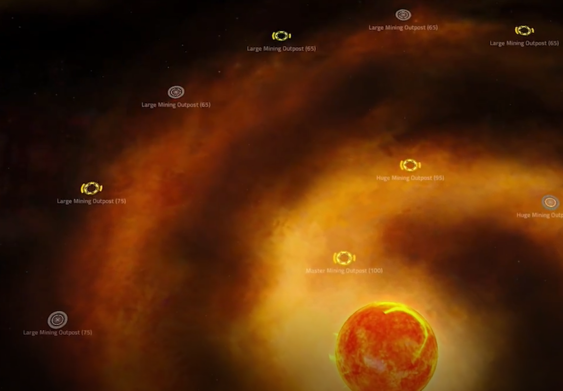 VEGA Mining has stripped entire sectors to the brink of extinction, causing stars in the strip-mined sectors to become unstable, hence the name Unstable Sector. Larus has managed to obtain key codes for certain Wormholes, allowing the Miner Rebellion passage into the Unstable Sectors.

There, they will find abandoned Mining Outposts which they can lay claim to in order to generate Solar Shards, which unlocks higher tiers of the event store.

The Unstable Sector is also a frequent gathering place for Marauder Clans, and they constantly fight each other in brutal clan wars. They also frequently clash with the rebels who come to lay claim to the Mining Outposts and their Solar Shards.

As of the 5th Alliance War, Marauder Pillagers have begun to roam the Unstable Sectors. They Spawn from Collapsing Stars and travel to wormholes.

Solar Mining Outposts are abandoned Mining Outposts originally owned by VEGA Mining and can only be found in the Unstable Sector. They can be captured by rebel alliances. Once taken over, they will start paying out Solar Shards every 5 minutes; the amount increases with the level of the Outpost. Do note that higher-level Outposts are much rarer, and that competition is fierce!

To capture a Solar Outpost, a player from the alliance must completely destroy it. The Outpost fully repairs itself after each battle, so it must be taken down in a single attack. Do note that unlike other NPC Targets, Mining Outposts follow PvP Gating rules.

There exists a multiplier that increases the number of Solar Shards collected from the Solar Outpost the longer you hold it, up to a maximum of x8. However, if an enemy alliance steals the Outpost and you do not recapture it within 10 minutes, it gets reset to x1.

Note that Solar Outposts continue to pay out Solar Shards and increase their multipliers even while being attacked, so it is viable to ping-pong the same Outpost between two different alliances.

Note that if a Mining Outpost is under attack when the collapse timer reaches zero, the bonus Solar Shards will go to the victor of that battle, whether that be the original owner or the attacker.

Below shows the icons that represent the various statuses of the Mining Outposts.

After the 5th Alliance War, Marauder targets, starting with Marauder Pillagers spawn from collapsing stars and travel to wormholes. They consist of a mixed group of Marauder Ships.

All ships deal Void Damage, and thus, Marauder Hulls are the best suited to dealing with them. Oddly, even though they are NPC Targets, they do not have extremely high Void Resistance, only the innate resistances to each hull.

With the late June 2019 update, the fleet levels for many T6-T7 targets have been rebalanced. Here were the old levels before the update and their corresponding new ones.