The Javelin Flagship is a jumpship, with the ability to warp itself and any escorts attached to it to any location in its current sector, albeit with a warmup and cooldown time. It requires a Wormhole Drive in order to function (details below).

In order to successfully launch a Javelin Flagship, you also need a Captain's Permit. These permits can be obtained from alliance leaders and officers, but each alliance can only hand out 75 of these permits at a time, limiting the number of Javelin Flagships deployed to the same number per alliance. Javelin Flagships are frequently seen delivering other fleets to attack faraway fleets and bases.

The Javelin Flagship offers near-instantaneous transportation for groups of fleets. They are extremely convenient in farming, by warping near the target and engaging it from across the sector map, with other escorts serving as cargo fleets to collect the remaining resources. In player combat, they can be used to conduct a surprise attack, or to provide quick reinforcements.

Note that because of Escort Mechanics, any escorts that are outside the Javelin Flagship's PvP Gating cannot be attacked by other players (does not apply to aggressive NPC Targets), unless they have already been selected prior to escorting. This allows the Javelin Flagship to provide a safe haven for vulnerable fleets (e.g. base attackers), provided that the Javelin Flagship itself is well-guarded against enemy attacks.

A Javelin Flagship is only considered as well-guarded if it has at least one escort within its PvP Gating to fight attackers. Otherwise, the ship can be attacked directly even with the presence of other escorts that are outside its PvP Gatling.

In order to reduce the amount of repair time you receive in the event that the Javelin Flagship is attacked, you should upgrade it to better take advantage of Resurgence.

Javelin Flagships are not meant for combat, period. While mark upgrades can improve their combat ability, it is not nearly enough to compensate for the ship's extremely slow speed. Fusion Thrusters are almost a must if you wish to stand any chance in an actual fight. Better still, never let your Javelin Flagship enter combat by escorting it with powerful fleets (within its PvP Gating, of course).

Apart from combat effectiveness, perhaps the most concerning part of the Javelin Flagship is its horrible repair time. This ship, when completely destroyed, takes a minimum of 11h 40m (1h 40m default + 10h 00m wormhole drive) to repair (unless the Wormhole Drive DS-1 is used, which would cut the repair time to 1h 40m + 3h 00m = 4h 40m, which is still a lot). To mitigate this, many players simply repair the ship to 10% health, which is the minimum required for it to be considered fit for launch. This is yet another reason why you should avoid entering combat with this ship at all costs: even if you win, you will usually suffer lots of repairs, even after considering Resurgence.

Due to the restriction of one flagship per fleet, those with a Javelin Flagship cannot simultaneously use a carrier, or a dreadnought. As a result, the entire fleet cannot benefit from any Support Field and is vulnerable to kiting. You should take advantage of the fact that the Javelin Flagship is often the main target of the attack and build a defense fleet around it, which often consists of destroyers (to prevent kiting), battleships (for damage) and/or cruisers (as tanks). Do not worry about the enemy running away from you; he/she will most likely attempt to destroy your Javelin Flagship in an effort to give you extra repair time.

Javelin Flagship hulls are no longer directly available. Instead, the Javelin Flagship Strongbox is sporadically offered during certain events, which provides crafting materials for this ship. 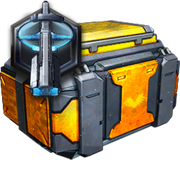 You only need to get one instance of this strongbox to craft a single Javelin Flagship. However, you have to first research the corresponding recipe in the Ship Lab, which requires Workshop IX.