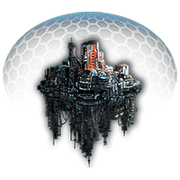 Base with active Defense Matrix

Defense Matrix is the term for the impassible shield that surrounds a base when sufficiently damaged. It is totally impenetrable and cannot be destroyed or bypassed except by NPC siege fleets, but is only temporary.

The defense matrix will, however, drop if the player whose base is protected attacks another player's fleet or base. It will not drop if another player attacks your fleet or if you attack an NPC fleet of any type, meaning resource harvesting is still possible.

Additionally, a defense matrix can be purchased by spending Coins, albeit with a cooldown.