THIS EVENT ENDED ON 12TH OF AUGUST. DECIMATOR FLEETS ARE NO LONGER AVAILABLE AND DATA CORES CAN NO LONGER BE OBTAINED. 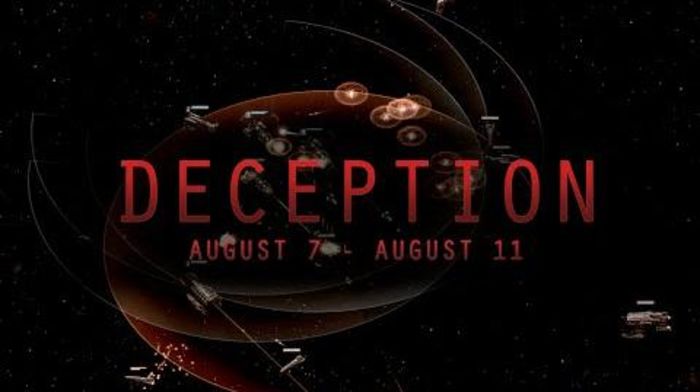 The mystery voice is heard broadcasting from multiple locations, confounding Bertram and Vorzer.

Deception was the 3rd event of VEGA Conflict, and the first one to be hosted on Unity. It introduced the Arrestor Beam Turret, Fusion Thrusters, and the top prize, the Gharial Cutter.During the event players suffered a Ddos attack (Ddos is a way of hacking which overloads a server and prevents any connection made into that server, so in the players case they couldn't join Vega Conflict) which made KIXEYE extend the event by 1 day making it the first event to have a 5 day duration.

It Was different in the fact that each vega fleet had 10 Ships in each fleet insted of the usual 6, making them very challenging to defeat. Level 27 Cargo fleets contained 8 Weak Swarm Corvettes  and 2 Weak Gharial Cutters. Level 30+ Fleets contained 6 Corvettes, 2 Gharial Cutters and 2 Dread Battleships in a different formation. The higher the fleet level, the better the shields and weapons, but the formation and ships stayed the same for level 30+ Fleets