The Creeper Torpedo is a unique weapon that functions similar to a mine layer.

It deploys red orb-shaped bombs that are slow but create a huge explosion in proximity to an enemy. 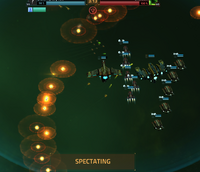 Creeper Torpedoes have relatively good mass efficiency, but their real strength lies in their large AoE. Even without boosters like AM Warheads and Volatile Fuel, the explosion is large enough to reliably hit multiple targets at once. They are excellent against clustered bases, with each explosion damaging 4 or more modules at once.

Their slow speed enables stationary ships to create a minefield, decimating anything that strays too close. This is especially useful against Hive Fleets, which rely on squadrons for damage. Similarly, Creeper Torpedos could function as a protective barrier for blitz ships, or as a chase deterrent for kiting ships.

Creeper Torpedoes can also be used to delay a battle's conclusion by up to 10 seconds.

Creeper Torpedoes are too slow to be effective in PvP fleet combat: most enemy ships could outrun the torpedoes themselves. Even when equipped with Volatile Fuel, their large spread means that only a fraction of the shots will hit their targets.

They also have a large minimum range that is easily exploitable, though this is unimportant considering that they are too slow to hit ships anyways.