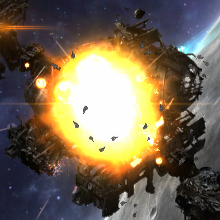 Collateral damage does not damage ships, squadrons, wings or Terminus mines. Heavily damaged, compact bases still repairing after battle or bases with low armor can be destroyed quickly as collateral damage can set off a chain reaction of explosion, destroying large portions of the base at a time.

Alien outposts have two modules that deal noticeable collateral damage to adjacent modules: the Alien Energy Capacitor and the Alien Citadel, which makes destroying them the key to demolishing the Outpost efficiently. Unlike in player bases, the collateral damage in Alien Outposts affects modules up to 2 diagonal squares away instead of 1.

Mining Outposts have three modules that deal significant collateral damage to adjacent modules: the Solar Shard Storage, the Solar Special Module and the Solar Bridge. Targeting these modules is the key to destroying the Outpost within a single battle. With the exception of the Bridge (3) and Special Module (4), the collateral damage in Mining Outposts affects modules up to 2 squares away.

According to what Kixeye CM CarterGee said on the offical update thread :

"Base modules have large amounts of energy passing through them to keep them functional. During combat as modules are destroyed, explosions occur that can affect nearby modules. As a rule, the higher a module’s base health the more energy it requires to keep operational, resulting in heavily fortified combat modules being particularly volatile. It is intended that players adopt new strategies for base layouts to avoid potentially disastrous chain reactions if their opponent breaches their defenses.