The Brimstone Torpedo is an area-denial Explosive weapon that splits into smaller fragments upon detonation, exclusive to battleships.

It fires a Vector Torpedo-like bomb that creates 6 small fragments sequentially with a delay of 0.2 s. These fragments travel in random directions at a speed of 700 m/s for up to 2,500 m. 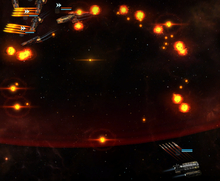 Scattered explosions of a Brimstone Torpedo

Brimstone Torpedoes are difficult to dodge due to the numerous fragments, thus guaranteeing damage against enemies that wander within range, especially when used in large numbers.

Enemies running directly into the torpedoes often find themselves hit by all 6 fragments as they spawn inside the ship's hitbox.

Brimstone Torpedoes have a very short range that cannot be increased through weapon boosts, this means that they will be outranged by almost every other ship weapon, which is disastrous for battleships as they are slow and require range to counter other ships.

Brimstone Torpedoes are very mass-inefficient and therefore inferior to Energy weapons such as Aurora Rays in close combat, considering that the vast majority of the fragments do not hit, not to mention the weapon's large minimum range.