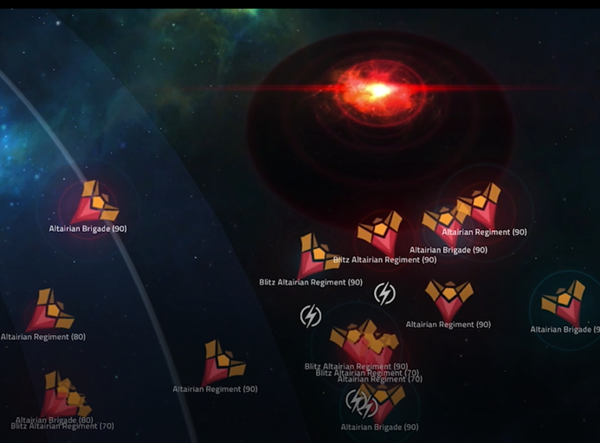 A Glowing Rift spawning a combination of normal and Blitz Altairian Targets.

Blitz is a feature that was introduced to VEGA Conflict in April 2018 with the Invasion event.

Event targets with the lightning symbol (

) at the bottom are eligible for Blitz. If the player successfully defeats the target in one attack, the Blitz feature kicks in for the next 5 minutes, allowing the player to repeat the battle instantly for up to X times, awarding the same score and rerolling the loot table from that first attack, thus greatly reducing the amount of farming that needs to be done. Otherwise, the target simply resets (to full health).

The cost of each repeated battle is the overall repair cost (in Coins) of your fleet after the first attack, regardless of the state of the fleet beforehand. This means that if your fleet was initially damaged, it would cost much more to Blitz, even if you take almost no damage from the Blitz target itself.

There exists a minimum and maximum coin cost per repeated battle. Even if you take zero damage or almost lose your whole fleet in the attack, your Blitz cost will remain in the given range.

After each Blitz, your fleet will not become more damaged; it retains its health at the end of the first attack.