The Aliens (also known as the Xeno Plague and the Green Veil) are a hostile faction, featuring technologies and ship designs that are starkly different from all others encountered so far.

They possess unique fleets that are categorized as Striker or Defense and have powerful bases that are far more advanced than rebels'.


The Aliens appeared in a surprise attack across all the sectors, invading through temporary Unstable Wormholes during the Incursion event.

Their attacks have persisted in the recent Alien Mobilization events that feature more powerful variants of their hives. They have also appeared in major events such as Search and Destroy. Ever since their appearance, they have been aggressively targeting the Miner Rebellion but do not attack their bases.

Since the Incursion event, Alien forces have appeared in feature events, as well as Alien Mobilization and Alien Decimation events. Aliens finally appear as a primary aggressor, along with the Demon Corps, in Vengeance.

As of Vendetta, General Geir can no longer control the Aliens and have waged all out war with the Miner Rebellion. With Geir's new "Power" they "hungered" and killed/corrupted Keres VII.

They also have a special virus when a subject is exposed to alien tissue while integrated with Blood Amber. The Blood Amber allows access to the Human brain for the aliens, this morphs the human into an insect-like creature with a deformed body and gruesome mouth as they lose all sense of control. This caused the Colony 47 incident sparking Alien outposts, also known as the "Green Veil" to the Altairians.

In Outbreak, the Rebels found the Alien Outposts, and swiftly began to purge the infection before it worsened. It was then revealed in Eradication that Geir has been fully corrupted by the Alien infection, leaving the Rebels no choice but to attack his Fortress and destroy him and the Xeno Division for good.

The Death of Geir and the destruction of the Xeno Division has turned the Aliens' attention towards the Miner Rebellion, and they finally recognize the rebels as a true threat to their dominance. Starting from the event AXIS, they begin to deploy their Ancient Alien forces, as part of their attempt to wipe out the Rebellion for good.

While the Miner Rebellion became occupied with betrayal from within their own ranks of the A.X.I.S. Project, the Aliens regrouped and launched a massive assault on Rebel space, raining Alien Armageddon upon them. Their attacks was ultimately successful, as they managed to lay waste to every single galaxy except for three.

Later on, during the Altairian Season, in Invasion, the events of Colony 47 and the Alien Infection were revealed to be caused by the Eugenics Experiments of the Altairians, although On-Wah put a stop to it, but Ny'tah intends to revive it.

These types of fleets were the first used, Aliens use Hives and first generation Harvesters as their offensive force. The Hives send massive amounts of Ranger Swarms and Gladiator Swarms and in later versions Photon Cannons and Rift Beams. Their damage cannot be resisted by any shield.

The squadrons flank their targets and have immense scramble range, however some squadrons have shorter scramble range. The masses of squadrons inflict massive damage and can easily destroy lone ships that are unprotected against squadrons. The closer the target is to the Hive, the larger the swarm of squadrons becomes.

The Photon Cannons and Rift Beams also have a very high amount of range and usually attack your ships or destroy squadrons on them. They cannot be dodged or evaded at all but can be exploited with proper shielding.

The 1st generation Alien Harvester also has a vast array of other advanced Alien Weaponry, namely the long range Flux Ray, as well as its Self-destruct weapon, the Surge Core.

All Alien Fleets can be recognized by the signature green colour of their fleet icons.

As the age of the Xeno Division began, the Aliens began to vary their tactics, alternating between their fast and speedy Reapers, second generation Hives (Barrage Hives). Both are led by second generation Harvesters which have similar traits compared to them but are more heavily armed and durable. They have also infected human colonies, transforming them into Infected Outposts. Their weapons can vary from either the conventional damage types to the Alien damage type, which is only negated by the Xeno Division's Hulls as well as their Armor technology.

Alien Reapers appear in groups of 10 and are really fast, and are armed with either Ion Cannons or Discharge Beams. They are best countered by ships with a large firing arc as well as 100% Accurate weapons such as Energy weapons as well as the Xeno Disintegrator Cannon and Xeno Rupture Beam. 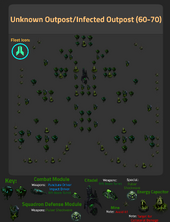 Alien Barrage Hives appear in groups of 2, and are armed with Eradication Beams, Viper Missiles as well as Quantum Cannons. They are really slow moving until they can be thought of as stationary targets. Their weapons are extremely damaging, but have large minimum range arcs. They are best countered by ships with extremely high movement speeds and stasis resistance such as Cutters.

The Alien outposts consist of an Alien Citadel defended by clusters of Corrupted Human Combat modules that are either armed with Rift Beam Turrets or Puncture Driver Turrets and Impact Driver Turrets. They also have Alien Squadron Modules that utilize a shockwave to shrug off Squadron attacks almost immediately. The Generators are also seen launching Elite Gladiator Swarms in Heavy Outpost versions. In addition, the Alien Citadel is capable of defending itself, it is armed with multiple Rift Beam Turrets, as well as a personal shockwave to destroy squadrons. It also launches Elite Gladiator Swarms in Heavy Outpost versions.

The Base is also guarded by mines, but unlike the rebel's Terminus Mines, they can be destroyed by collateral damage, rendering them ineffective and making passage through the Alien Base easier.

All of the modules have collateral damage, which is considered negligible, but there are several Energy Capacitors of varying sizes scattered around the base, which if taken out, can cause severe damage to the modules around them. The Citadel also has a lot of Collateral damage if destroyed, and will almost certainly take out every module around it, regardless of the level of the Alien Outpost. The Outposts are best taken on by a fleet of Destroyers supplemented by Decoys and occasionally, a Suppressor. To fully defeat the Alien Outpost, every single module must be destroyed.

The 2nd Generation Alien Fleets and Outposts can be recognised by the signature green used for all alien fleets and targets.

These were the last fleets fought by the rebellion, The fleets contain upgraded types of previous Alien hulls, called "Ancient". They are unique as they deal a new damage type - Plasma Damage and have the ability to call in normal variants of itself.

Hulls that are classified Ancient usually need to be handled the same as the corresponding fleet it is replacing.

The Ancient Reapers appear in groups of 2 to 3, alongside their smaller Alien Reaper Cousins. They are armed with long range, highly damaging but slow firing Tracer Missiles, and are also occasionally summon Alien Reapers to aid in the offensive. Like the original Reaper Fleet, they are best countered by ships with a wide Firing arc as well as 100% accurate weapons like Energy weapons and their Xeno variants. An elite variant of the Ancient Reaper exists in the form of Ancient Blitz Reapers, with upgraded Wormhole gates enabling to spawn large amounts of Alien Reapers. They are also armed with rapid-fire Shredder Cannons that are capable of piercing multiple targets.

The Ancient Hives appear in a pair, and are backed up by Alien Stasis Modules armed with 3 Arrestor Beam Turrets. the Ancient Hives deal damage using their vast arsernal of Weapons, consisting of long range Scattershot Missiles and Plasma Eradication Beams, as well as Displacement Torpedoes and Plasma Quantum Cannons. The Ancient Hives are also able to summon 2nd Generation Alien Hives (Barrage Hives) to aid in the offensive. Like their predecessors, they are slow moving until they can be considered stationary. They are also best countered by ships with stasis resistance and high speed, namely Cutters.

Ancient Outposts are heavily buffed versions of the Alien outposts, with a few notable changes. The Alien Swarm Modules launch Nightingale Wings instead on all levels and variants, and some Alien Combat Modules are armed with Plasma Rift Beam Turrets. The Citadel is also armed with Plasma Beams and Nightingale Wings. As all variants and levels have squadrons, they are best countered by Destroyers with decoys and a Suppressor. Elite versions of the Ancient Outposts exist as well, and are more heavily defended with at least 3-5 Alien Citadels within them. They are designed to be taken down by 2 players at once.

The Plasma Damage dealt by the Ancient Aliens can be negated by A.X.I.S. Hulls and Tech.

The Ancient Alien Fleets and Outposts can be recognised by their characteristic Yellow Colour.