The Alien Reaper is a small, fast Alien ship introduced in the event Vengeance.

Alien Reapers are designed to swiftly interdict and destroy their opponents, utilizing numbers, high maneuverability (around that of a Swarm Corvette) and Stasis Resist (most of the time) to annihilate their opponents.

The Alien Reapers' AI causes them to rapidly close with and then encircle the players fleet, though they have been seen to suddenly dash through the fleet on occasion.

Although this ship only has modest range, their stasis resistance renders most kiting attempts ineffective.

High DPS weapons are essential because they take down Alien Reapers faster, thus reducing the amount of damage taken. Only homing and beam weapons can reliably hit these ships due to their incredible speed.

Cruisers supplemented by a carrier and battleships are recommended when fighting fleets consisting of the Alien Reapers. Cruisers to tank the damage, the rest to maximize on firepower. Battleships in particular can deal double damage using their dual firing arcs.

Like all Alien Hulls, the Reapers do not have shields, and thus Demon Corps Ships with Blister Rounds will greatly help in taking down the Reapers quickly and efficiently.

Reapers have abnormally large collision boxes, making them troublesome as the push ships out of formation. However, this also leads to groups of reapers running into each other and trapping themselves in place. 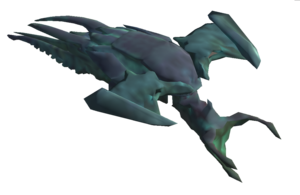