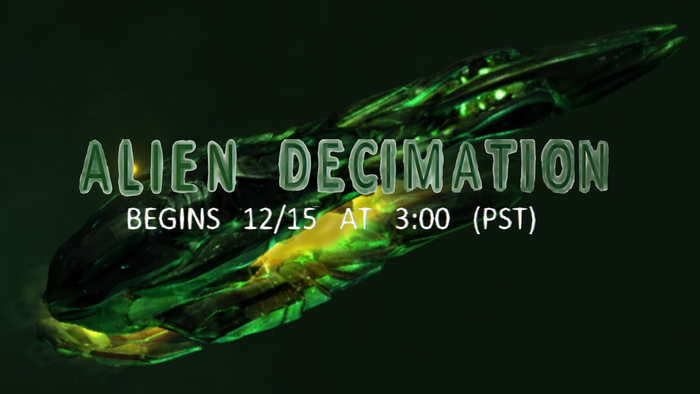 Alien Decimation is a recurring event that is one step above Alien Mobilization, mainly featuring targets from the Alien faction. Alien Decimation mainly caters to those who are truly end-game.

This event is unique in that each Residential Sector is assigned a phase (threat level) which determine the event targets that are spawned. In general, the higher the threat level, the more powerful the enemies, which also offer better loot. As each sector must earn a certain amount of Intel (the event currency) to move onto the next phase, coordination is recommended to suit the needs of the populace. A bar is shown to indicate the sector's progress towards the next phase.

If the sector fails to gather any Intel for some period of time (regarded as "sector inactivity"), a reset timer will be initiated which, upon reaching zero, resets the sector back to Phase 1 after a short inactive period. This mechanic is reset every time the sector gathers Intel.

Since the Aliens are no longer a formidable threat after Tier 6, this event has been replaced by its Alien-less successor, Decimation.


The initial form of Alien Decimation run during the Demon Corps season, featuring 4 phases, starting with Suspicious Freighter fleets and ending in the fearsome Alien Harvester.


The third form of Alien Decimation run during the A.X.I.S. season, featuring 2-3 phases. Classic and regular Alien fleets were removed to make way for their Ancient cousins. The boss phase was removed (alongside the Alien Harvester targets) for a few iterations before the Ancient Harvester was introduced. Renegade A.X.I.S. fleets could also be found after the events of Betrayal.