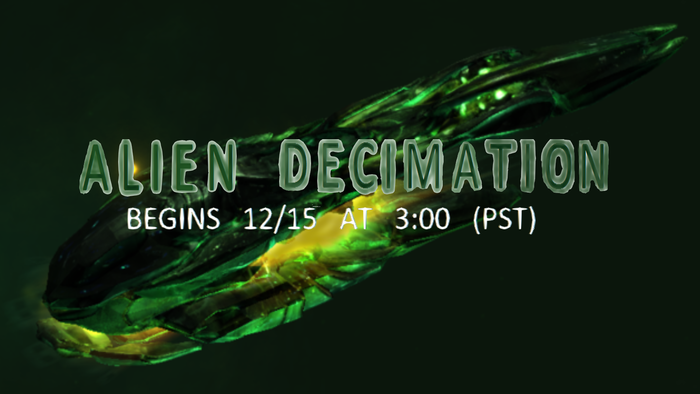 This page is a summary of all Alien Decimation events so far. It is mainly a redirect page to help you navigate through the various iterations of Decimation.

Alien Decimation List/A.X.I.S. is the current version of Decimation. If you're trying to find a specific item, just hit Ctrl + F and type the name.

Alien Decimation is a recurring high-level event and a very special event as it includes multiple phases throughout the event. Unlike many other events, Alien Decimation does not include a base attack, thus intel can only be acquired by attacking fleets. Alien Decimation mainly caters to those who are truly end-game.

Alien Decimation is a sector-wide event making coordination and teamwork valuable as the sector must earn a certain amount of intel in each phase (threat level) to move onto the next phase. A bar is shown to indicate how much the sector has moved in that phase.

If the sector fails to gather any intel for some period of time (regarded as "sector inactivity"), a reset timer will be initiated which resets the sector back to phase 1 after a short inactive period upon reaching zero. This timer is reset every time the sector gathers intel.

When the final phase ends, fleet spawning becomes inactive for a short period of time before the sector resets to phase 1, similar to the situation with sector inactivity.

: Available as a guaranteed loot drop (level may vary)

: Available as a possible loot drop (level may vary)

Note: The most direct method of obtaining the prize is shown. (